It’s no secret that waterfront properties are some of the most desirable homes on the market. Whether you live directly on the water or just in a waterfront city, there are so many advantages that come along with it. Water provides endless opportunities for recreational activities such as swimming, kayaking, boating, paddleboarding, fishing, water skiing, tubing, sailing and so much more.

Grimsby is a charming town located on the northwest side of the Niagara Region. Due to its central location, Grimbsy is often referred to as “the gateway between Hamilton and Niagara” and is easily accessible via the Queen Elizabeth Way. The town is nestled between the southern shores of Lake Ontario and the Niagara Escarpment (locally referred to as the mountain). As a result of these surrounding natural features, Grimsby’s urban growth is relatively constricted.

With a population of under 30,000, Grimsby is well known for its ‘small town vibe’ and sense of community. Luckily for residents, there are plenty of amenities located within the town limits and if you can’t find what you need, you can take advantage of the large cities that are close by such as Hamilton, St. Catharines, Toronto, Niagara and Buffalo.

With the Niagara Escarpment to the south and Lake Ontario to the north, there is never a shortage of outdoor recreation to enjoy in Grimsby. Some of the most popular places to enjoy include Grimsby Beach, Beamer Memorial Conservation Area, Forty Mile Creek, and more.

St. Catharines is the largest city in the Niagara Region. The city is easily accessible via Queen Elizabeth Way, Niagara Regional Road 81 and Highway 406. St. Catharines is located on the southern shore of Lake Ontario and has both the Welland Canal and Twelve Mile Creek running directly through it, providing plenty of water access points for residents and visitors alike.

St. Catharines is commonly referred to as “The Garden City” due to the abundance of parks, gardens, trails and other greenery. With 17 community gardens, 108 parks, several beaches and over 90km of hiking trails located throughout the city, you will never run out of outdoor recreational activities. Some of the most popular places to visit in the city of St. Catharines are Montebello Park, Port Dalhousie, DeCew Falls, Burgoyne Woods and more.

Niagara-on-the-Lake is a quaint town located on the northeast corner of the Niagara Region, where Lake Ontario meets the Niagara River. Designated as a National District in 2003, Niagara-on-the-Lake has a rich history surrounding the War of 1812 and other historical events. Some of the historical sites that can be found in the area include Fort George, Fort Drummond, Mississauga Point Lighthouse, Niagara Apothecary and more.

Today the town is most known for being the home of the Shaw Festival, which originated back in 1962. It is now North America’s second-largest repertory theatre company that performs more than 10 productions annually for over 250,000 show go-ers.

Niagara-on-the-Lake is also home to another famous festival known as the Niagara Icewine Festival. This event is held annually in January and has been a tradition since 1994. Thanks to the plethora of wineries and vineyards in the area, the Niagara Region is Canada’s number one producer of icewine.

It’s no surprise that Niagara Falls is on this list. Although it is not located on a lake, it is located directly alongside the Niagara River and is home to not one, but three of the most famous falls in the world (Horseshoe Falls, American Falls and Bridal Veil Falls). The city of Niagara Falls is home to over 88,000 people however, as a popular tourist destination there are millions of people who visit the falls annually.

Thanks to the touristy nature of the city there is never a shortage of both indoor and outdoor recreational activities. Some of the most popular attractions in Niagara Falls include the Butterfly Conservatory, Clifton Hill, Niagara Glen Nature Area, Botanical Gardens, and more.

Fort Erie is a quaint town with rich history, it’s located on the southeast corner of the Niagara Region. It is easily accessible via the Queen Elizabeth Way and is also connected to Buffalo, NY via the international Peace Bridge. Fort Erie has undergone major commercial and residential expansion and development in recent years making it the fastest-growing community in the Niagara Region.

Between Lake Erie and the Niagara River, Fort Erie is surrounded by water on almost all sides. Many of the popular attractions in the town can be found along the coast including Bay Beach, Old Fort Erie, Waverly Beach Park, Point Abino Conservation Area and Frenchman’s Creek National Historic Site. However, the entertainment doesn’t stop there. Fort Erie is also home to many other activities for local residents and visitors to enjoy such as Safari Niagara, Fort Erie Race Track, Stevensville Conservation Area and others.

Port Colborne is located on the south side of the Niagara Region where the Welland Canal meets Lake Erie. Although incorporated in 1870, the village was originally settled in 1832 and known as “Gravelly Bay”. As one of Canada’s largest inland ports, Port Colborne has a rich background in the maritime industry. The community takes pride in its history and heritage by celebrating the Canal Days Marine Heritage Festival annually in July.

Although Port Colborne may be a smaller town, it is easily accessible via several main roads which stem from all directions. It is under a 30-minute drive to the nearest cities of St. Catharines, Buffalo and Niagara Falls. Despite its size, there is no lack of recreational activities for locals and visitors including The Friendship Trail, Nickel Beach, Sugarloaf Harbour Marina, Humberstone Marsh Conservation Area and more.

Do You Want Waterfront Property In The Niagara Region?

Whether you are looking for waterfront property, or just want to live in one of these amazing waterfront cities located in the Niagara Region, Davids & DeLaat can help! We are experts in the local real estate market here in Niagara and we are dedicated to helping our clients find the perfect home. Make your real estate dreams come true by taking a look at the current MLS listings or by reaching out to one of our real estate professionals today!

Guide to Buying a Home in Niagara 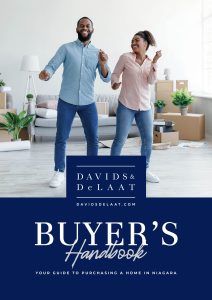 So, you have finally made it to the closing process of getting a house. Congratulations! There are just a few more things that you need to take care of before moving into your new home. Read today’s blog as we cover the typical closing process when buying a home!

There are some things you need to know when buying a second home. This blog covers all the information you need before making that big purchase!

Perhaps you are a couple whose children have all grown up and left home. Maybe […]